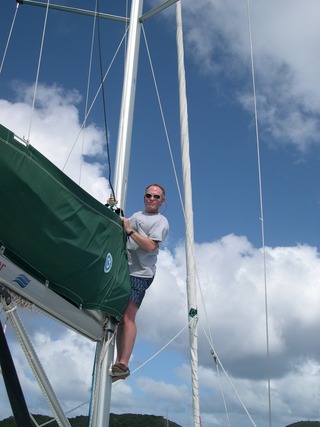 Sailing in the Caribbean is completely different from what I do everyday in New York City. All the cliches apply for me. I like the challenge of working hard on the boat, focusing my mind and my energy in a very specific way. It's peaceful even when the conditions are difficult. We had rain, strong winds, and high seas on this trip and it was still wonderful.

My husband Nick grew up sailing on the West Coast of Florida. He is a natural. I’m not. But I've loved sailing almost from the first day he took me out on the small boat he sailed on Lake Lanier north of Atlanta. The first day was a Sunday and I brought the New York Times. I thought that I could lounge around and read while he sailed the boat. When the wind picked up and I was lounging the boom swung around and hit him in the head. After that, I realized that I had better participate.
Nick's taught me a lot. We raced a 23 foot boat on the lake for several years.
But I haven't sailed consistently enough to become an accomplished sailor. I’d like to learn more now. On this trip I put aside my fear of taking the helm and my skills improved. The strong winds and the high seas made the sailing challenging and because there were only two of us on the boat, I had to do a good job. I’m eager to sail again soon. 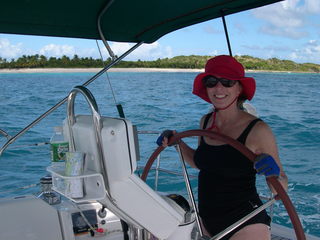 I'm happy to be at the helm.

Here I am in France in the legendary forest of Broceliande where King Arthur searched for the holy grail and Morgan le Fay is said to have kept unfaithful men captive. Please read the story about our trip below. 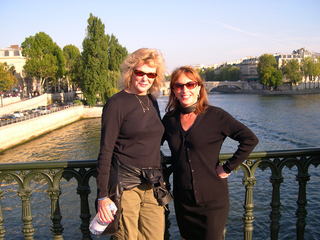 My friend Sharon Adams on I on the bridge over the Seine leading to Notre Dame. 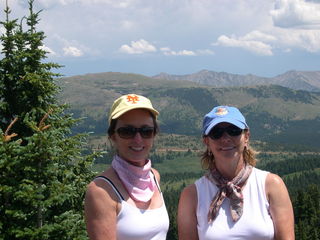 My sister Hope Tudanger and I are on Shrine Pass above the Vail Valley in the Rocky Mountains.
We're wearing neck scarfs to try to protect our skin from the sun. And "Yes." We know we look goofy. 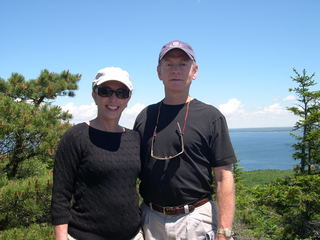 Nick and I are on the top of Acadia Mountain on the Southwest side of Mt. Desert Island off of the coast of Maine.

My husband Nick Taylor and I love to write about our travels. Here's a story about a recent trip to Brittany. If after reading it you'd like more information please email me.

Pirates, Saints and Seafood: A Tour of Brittany

Barbara Nevins Taylor began narrating audiobooks in 2015. She is also the founder of ConsumerMojo.com. As an entrepreneurial digital journalist, she is dedicated to providing information that can help people make informed decisions.

The award-winning TV news investigative reporter won her 22nd Emmy award in 2012 and teaches the next generation of journalists at CUNY colleges. She will teach a class called “Stories of Immigration” at The City College of New York in June.

On ConsumerMojo.com, Barbara uses the latest digital and video storytelling techniques to serve a growing audience that needs reliable information about complicated issues. She and her team report about 55-Plus concerns, Medicare, immigration issues, credit, student loans and more.

As a TV investigative reporter, Barbara pursued stories that made a difference in the lives of individuals and the community. This was evident in her work as she moved from Huntsville, Alabama to Lexington, Kentucky to Atlanta, Georgia and to New York City to work for WCBS-TV, CNBC, WWOR-TV and WNYW-TV.

Her stories reflected her personal commitment to enterprise reporting about important social and financial issues and trends. She is the winner of more than fifty major journalism honors and awards including a “Laurel” from the Columbia Journalism Review.

Her reports earned praise, generated government action and helped send wrongdoers to prison. Long before the most recent financial crisis, Barbara exposed flaws in the mortgage lending and banking system.

In the spring semester of 2012, she was the Jack Newfield Visiting Professor of Investigative Reporting at Hunter College. She’s an Assistant Professor at Brooklyn College where she teaches video reporting and writing. She also taught broadcast writing at Hofstra University.

The alumni of the City College of New York awarded her the prestigious Townsend Harris Medal in recognition of her outstanding achievements. She was also named to The City College Communications Alumni Hall of Fame.

Barbara’s last TV job was with WNYW, Fox5 and WWOR, My9. She worked as a television correspondent for more than twenty-five years. Before taking a hiatus from reporting in 1991 to devote attention to a foster child, she was a long-time correspondent for WCBS-TV where she won acclaim for her perceptive reporting. Previously, she was the chief political correspondent at WAGA in Atlanta, Georgia. She began her TV reporting career at WHNT in Huntsville, Alabama and went on to work as an anchor and reporter at WKYT in Lexington, Kentucky.

Barbara contributed to The New York Times Op-Ed page, writing about issues affecting young people in New York City. Her writing has also focused on issues of concern to parents and women, and has appeared in national magazines. Her book Beautiful Skin of Color, with doctors Jeanine Downie and Fran Cook-Bolden, published by ReganBooks, evolved from her television reports.

Barbara is a trustee of the Community Service Society of New York. She has been a foster mother and a mentor to many children.

Barbara is married to writer and Authors Guild past President Nick Taylor, author of twelve non-fiction books including American-Made: The Enduring Legacy of the WPA, When Roosevelt Put the Nation to Work; and Laser: The Inventor, the Nobel Laureate and the 30-Year Patent War. He is also the co-author, with John Glenn, of John Glenn, A Memoir. Barbara is a black belt in full-contact, traditional Japanese karate and she practices yoga, rides a bike and enjoys sailing, gardens and likes to cook. 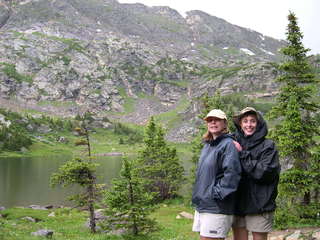 This was my birthday hike in 2004, and my sister Hope Tudanger and I at Missouri Lakes almost 11 thousand feet high in the Rocky Mountains of Colorado. My sister and brother-in-law Ed live part-time in Colorado. They ski and snowshoe everyday during the winter months. I don't like the snow, so Nick and I visit in the summer. We love to take long, tough hikes through the wild flowers almost up to the top of the moutains.

July 26th. It was a beautiful morning when we left the valley where my sister Hope and brother-in-law Ed live. They chose a long hike in the Holy Cross Wilderness Area, west of the continental divide, up to a place called Missouri Lakes. It’s a series of small lakes on a dramatic plateau about 11 thousand miles above sea level. We picked up sandwiches and water at a small deli and tucked them into our backpacks. The trailhead was about a 25 mile drive from Hope and Ed's house. The drive through mountains was spectacular through western towns called Redcliff, Minturn, and Leadville. But we were after something more strenuous and a little riskier. We parked the car, and started the steep ascent. The first ten minutes of a hike are tough for me as I adjust to the kind breathing you need to do in high altitudes. Hope and I walked slowly as Nick and Ed barreled ahead. We wound our way through thick woods, up the steep trails, past streams, waterfalls, and beautiful wild flowers. I had a field guide and was very eager to name every flower that I saw. So Hope and I were much slower than the guys. About an hour into the hike, it started to rain. We had rain gear, ponchos and hats, so we weren’t too concerned. There weren’t many people on the trail, although we passed a few small groups, and others passed us. Suddenly it started to sleet. We saw three people who had passed us huddling on a huge boulder under a tree that wasn’t providing much shelter. We pressed on. It was impossible to hide from the pellets of hail pummeling us. We kept are heads down. We tread carefully, climbing over the slippery rocks, and squishing through the red dirt turning to mud. No one suggested that we turn back. It was my birthday. We had to complete the hike. Three hours after we began, we straggled into a wide meadow. We were close to the top of the snow covered mountain peaks, and the chain of lakes lay right below them. But we weren’t there yet. Ed and Nick had disappeared through a strand of trees. I was wet, walking slowly with great determination. Hope was behind me. Suddenly from the left a bolt of lighting shot out in front of me. If I’d been walking a little faster, I would have been hit. I didn’t scream. I kept walking. “Did you see that?” I called to Hope. “I saw it,” she said. Nick and Ed were waiting near the lakes, under a tree, trying to stay dry enough to eat. We were numb from the climb, and soaking wet. But it was so beautiful. Each of us, except Hope, drifted off to find a place to pee. Hope doesn’t do that in the wilderness. We wandered around. We ate. The soggy sandwiches tasted delicious, and then we began the climb down. It wasn’t hailing. It wasn’t raining. The sun came out. It was a wonderful day. 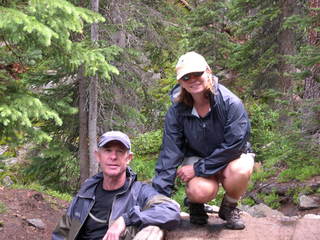 Hope and her husband Ed on the trail to Missouri Lakes. They hike these beautiful, rugged mountain trails frequently.

On this day in July, it rained. It sleeted and the sky was piereced with lightening. After two hours of hiking, we were walking single-file, the guys were ahead of us. As we approached the lake area a bolt of lightening shot out in front of me. A little stunned, Hope and I walked on to meet the guys. It was a seeing to believe-it moment, and both Hope and I saw it. 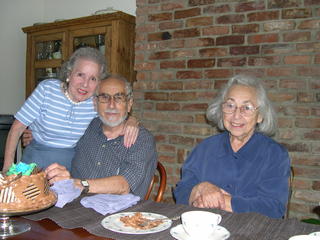